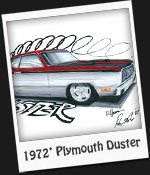 If you are going to SEMA this year, be sure to stop by OER's booth #24175 where we will be unveiling the "TWISTED" Duster, a 426 HEMI-Powered 1972 Plymouth Duster that was built for Season 8 of SPEED TV's Chop Cut Rebuild TV show. OER's booth is in The Restoration Marketplace directly across from General Motors at the north hall of the main convention center. Don't miss the unveiling of this awesome Mopar!
Watch the next episode of the series on 10/29 at 8:30am EST or tune in on 11/01 at 3:30pm EST on SPEED TV!