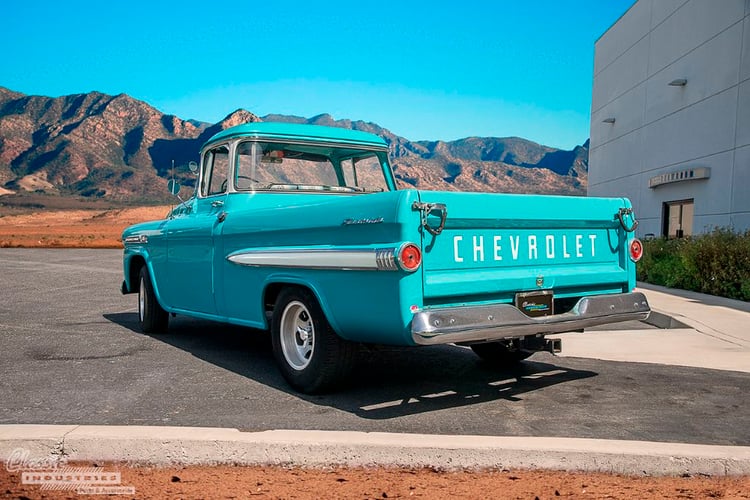 Chevrolet trucks have changed a lot over the years, with each model year and generation offering unique features that helped them redefine what a pickup was capable of. Classic Industries is committed to supplying owners of these timeless pickups with restoration parts, but we're also committed to preserving their legacy. To this end, we've created a visual guide to help you identify Chevy truck model years and learn about their differences. In this article, we'll cover 1947-1959 Chevrolet trucks one year at a time.

The images in this article have been scanned and preserved from original documentation, and show sub-models based on the Chevy truck platform for each model year. Important notes are included for each year and generation.

Occasionally a customer’s truck is titled 1947 but the body design is actually 1946. This can make ordering parts confusing. There are two reasons for this: 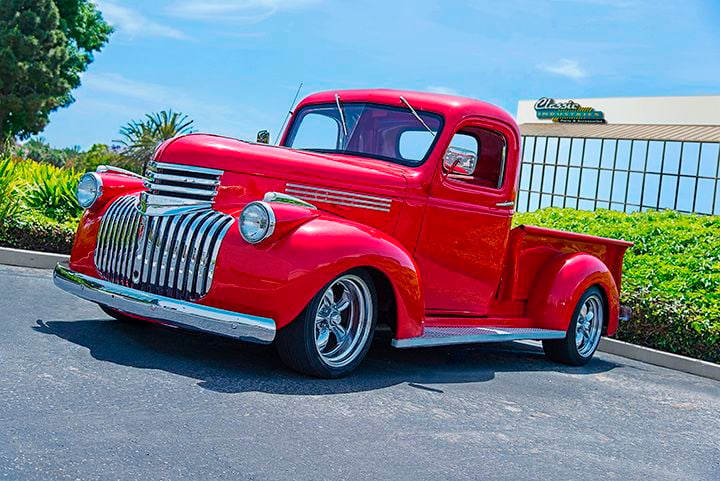 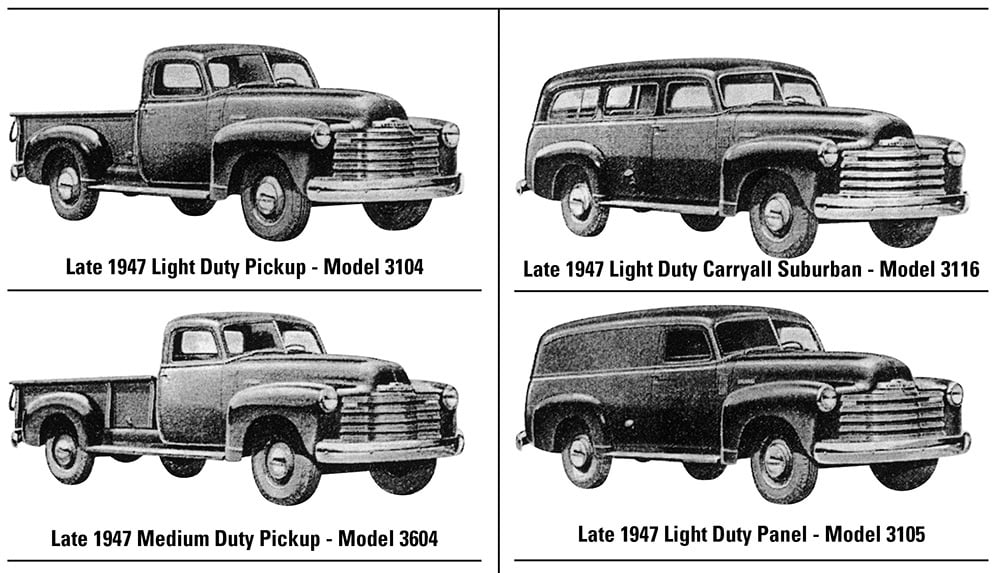 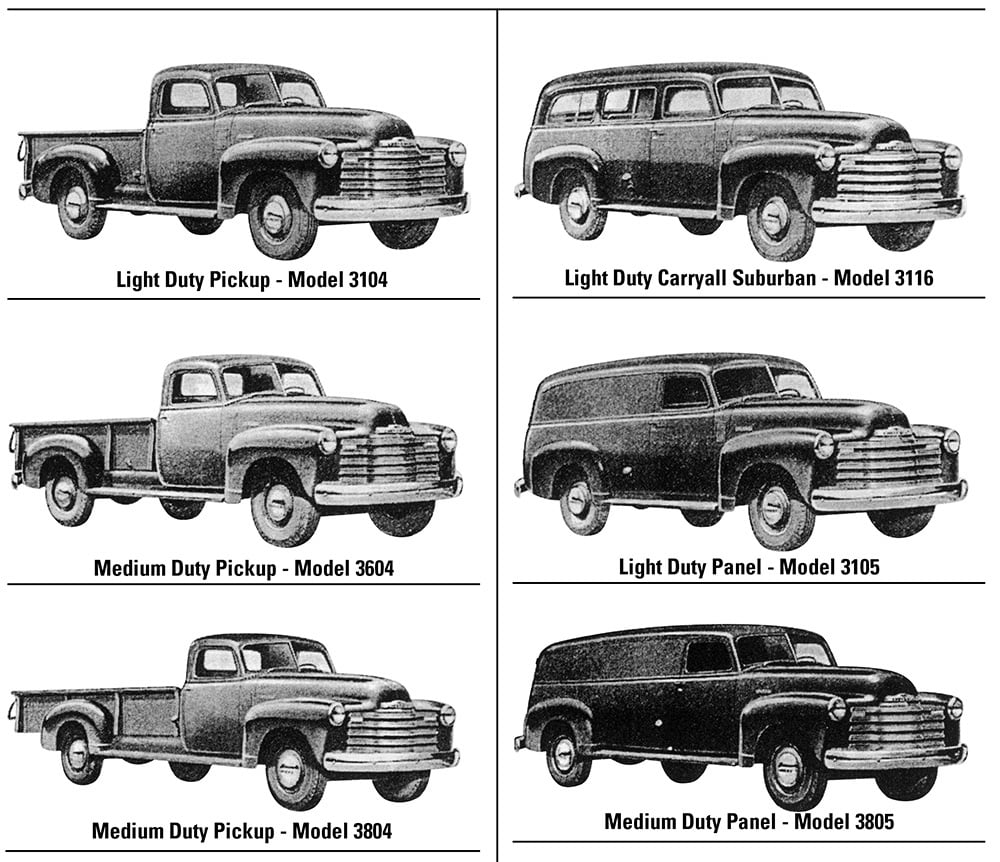 1948 models are very similar to late 1947 models, with some minor changes. Redesigned three-speed transmission now uses column shift with linkage attached to case side. The 1948 emergency brake was relocated to the far left side of the cab and is now a foot operated mechanism. Serial numbers: FP 1/2 ton, FR 3/4 ton, FS 1 ton, etc. 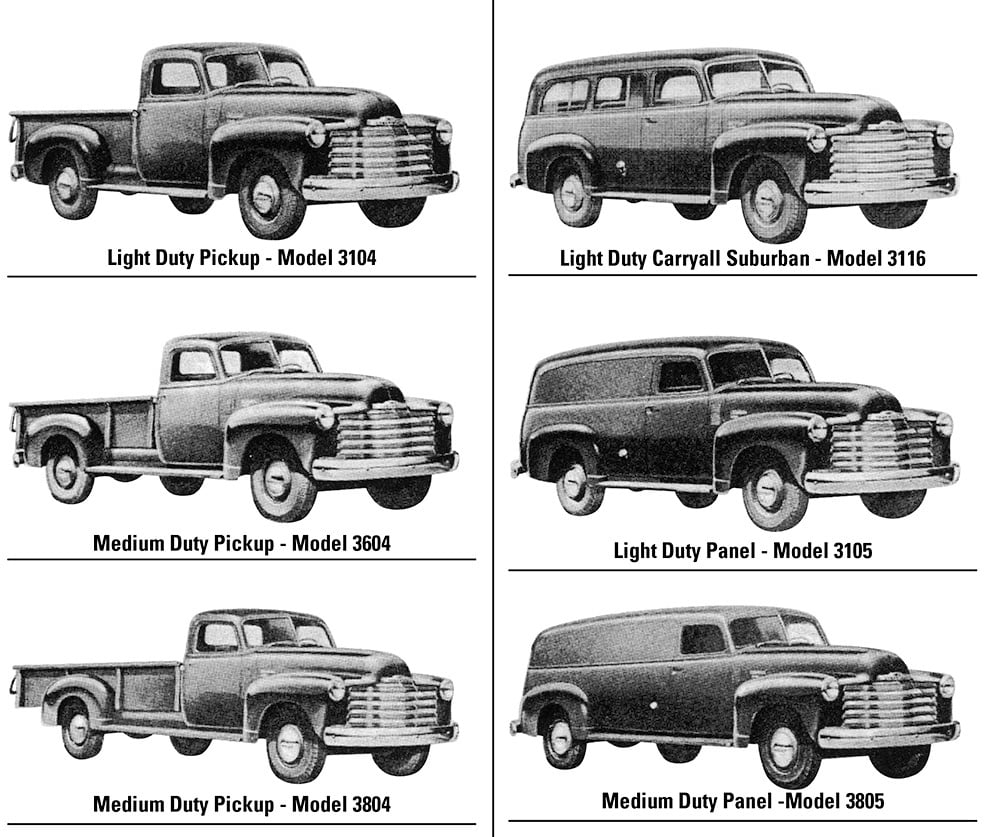 Late 1949: Last lever action shocks on Chevrolet, this carried on one more year on some GMCs. New style cab windlace fits in metal track around door opening. Headliner center bow is now “floating type”, not screwed to roof of cab, as before. Hood side emblem says CHEVROLET, no longer says THRIFTMASTER. Series designation emblem-is also on side of hood; 3100 on 1/2 ton, 3600 on 3/4 ton, 3800 on 1 ton, etc. Serial numbers: same as early 1949.

Engine in pickups remains 216 cubic inch Babbitt bearing low oil pressure type for Chevrolet, used from 1937 to 1953. GMC continues with the 228 cubic inch full pressure engine as their standard unit. Seat adjustment horizontal rod under cushion is run through a rubber grommet which is secured to the seat riser frame. Earlier year seats adjusted with a metal cable. 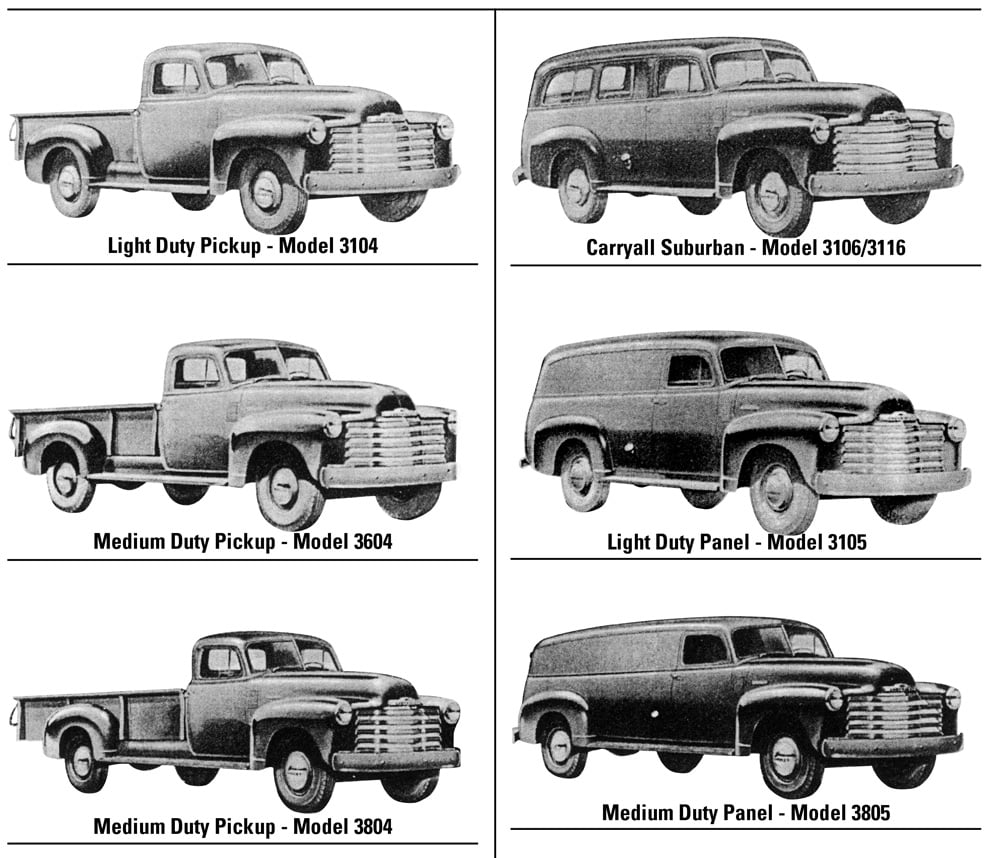 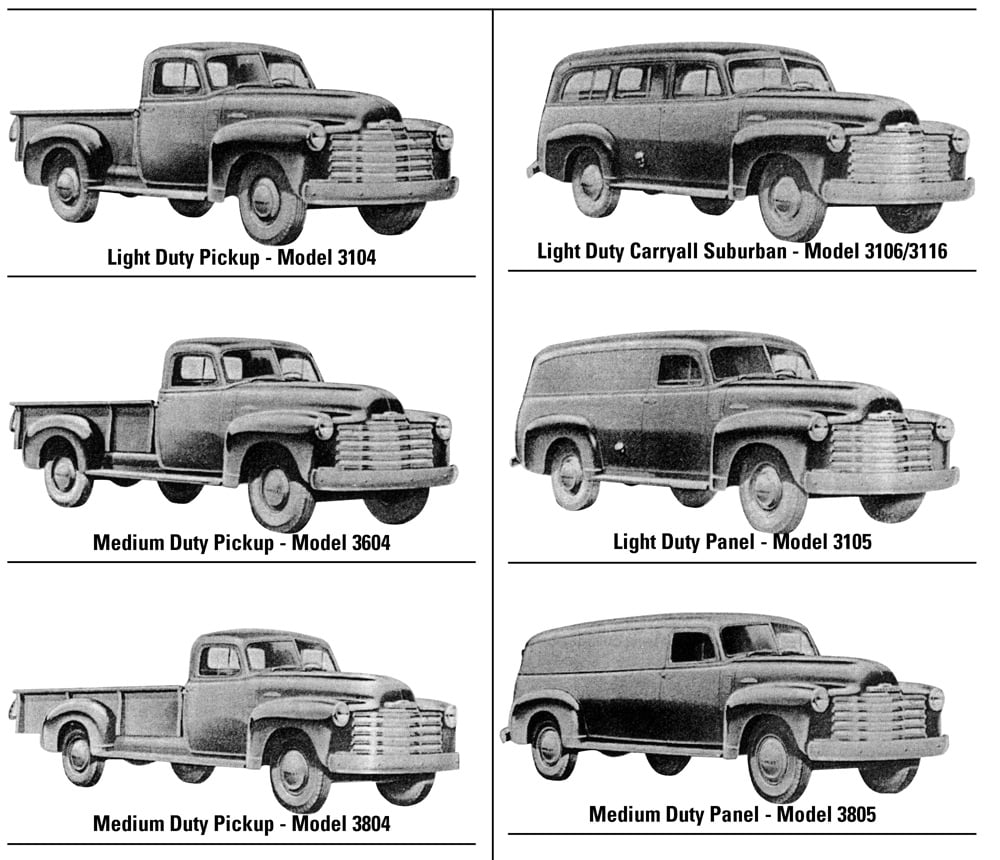 Hood emblem is now stainless steel. First year for the optional left side mount spare on this series of pickups. Last year for wood blocks under bed. Wiper knob is maroon plastic, as in 1952. Last year for 216 cu. in, Babbitt bearing type engine. Hood side emblem changed to large 3100, 3600, 3800, etc only. No CHEVROLET emblems on hood side. Rear bumpers are re-introduced on pickup models. First year for blue and silver ID door post plate. Prior years were black and silver. Serial numbers: H 1/2 ton, J 3/4 ton, L 1 ton, etc. 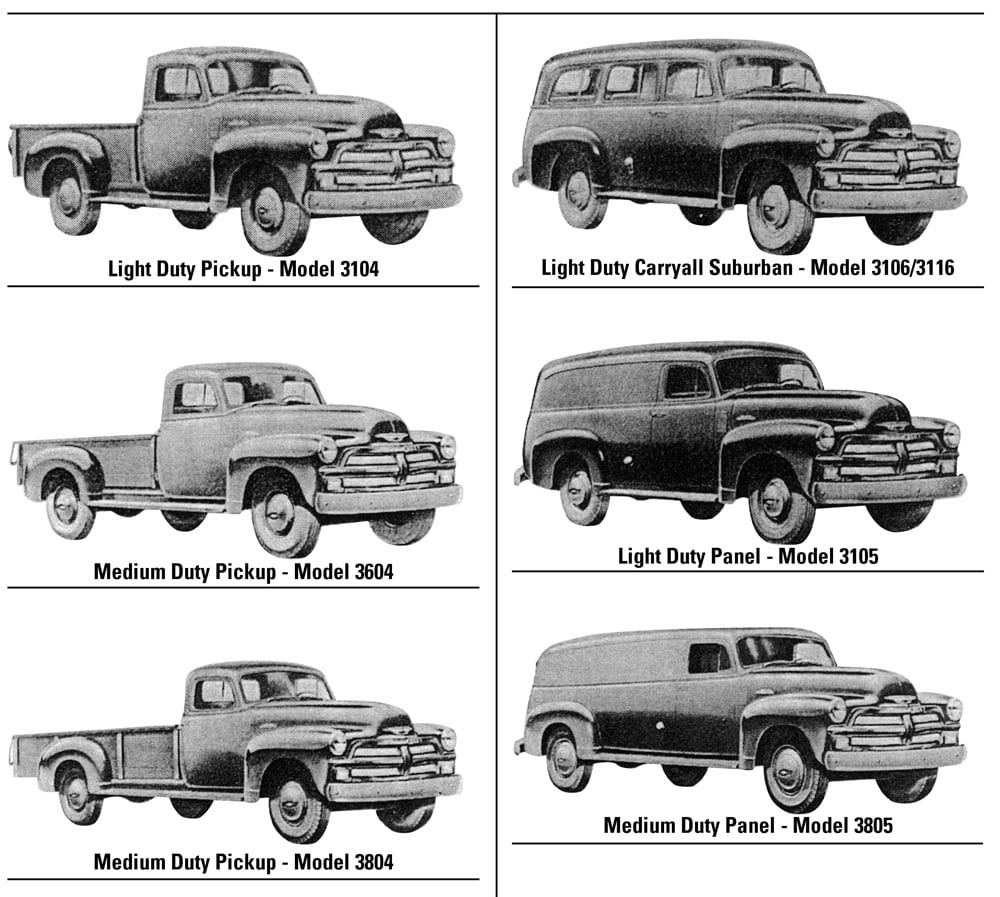 Chevrolet has the newly introduced cross type “bull nose” grille. Introduced the new high pressure 235 cubic inch insert bearing engine on pickups, and 261 cubic inch six cylinder on larger trucks. Hub caps have the same shape as the 1953 type, however now have only the Bow Tie emblem. Park lights are now in the lower corners of the grill/fenders. New front hood emblem shows only a stamped Bow Tie and is now longer on top than bottom. Hood side emblems are still 3100, 3600, and 3800.

Early 1955 trucks, referred to by many as the First Series, were almost identical to the 1954. First year for the open drive shaft on 1/2 ton pickup and panel. Final series with the six volt system on Chevrolet. GMC continues to make 12 volt an option throughout the year into the next body style. Hood side emblems now are one piece with CHEVROLET at the bottom and 3100, 3600, or 3800 above. Serial numbers: H 1/2 ton, J 3/4 ton, L 1 ton, etc. 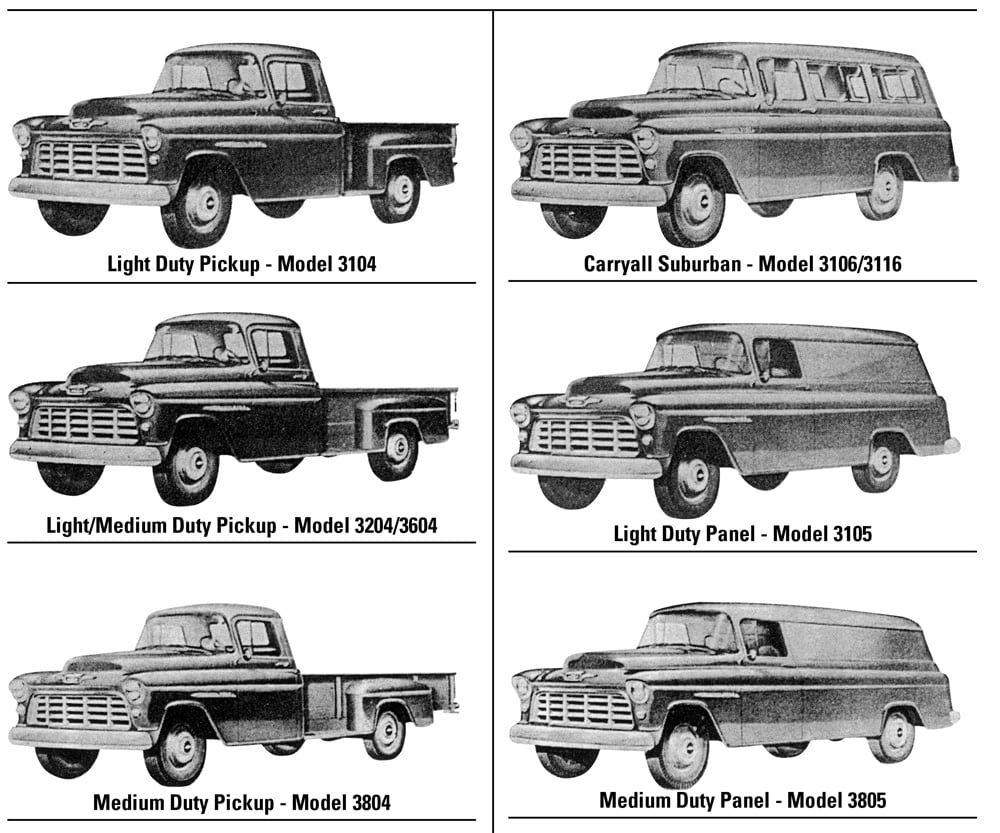 In mid-year 1955, Chevrolet introduced this new body style truck. It was completely redesigned from previous years and very few parts will interchange with the older models. Grill design has 3 horizontal bars and 4 uprights. Single headlights in front fenders.

Very similar to 1955 Chevy trucks. Fender emblems are two piece and mounted above horizontal line on fender. Emblem on front of hood is now longer on bottom than top. Front hood emblem has a cast in V if a V8 truck. Serial numbers: 3A 1/2 ton, 3B 1/2 ton longbed, 3E 3/4 ton, 3G 1 ton, etc. 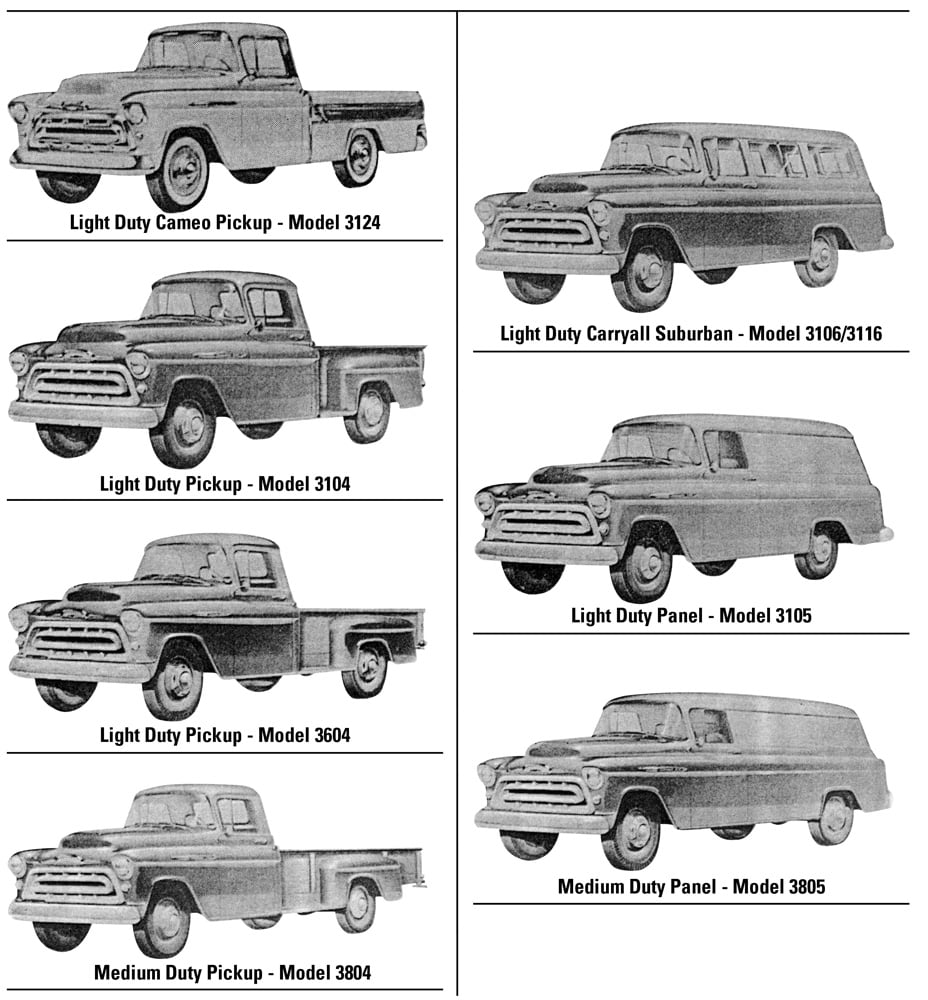 Similar to previous years but with a few significant changes. Fender emblems are now one piece mounted above horizontal line on fender. Front hood emblem is the same as 1956 but paint scheme is reversed. Hood has two raised humps on top running front to back. 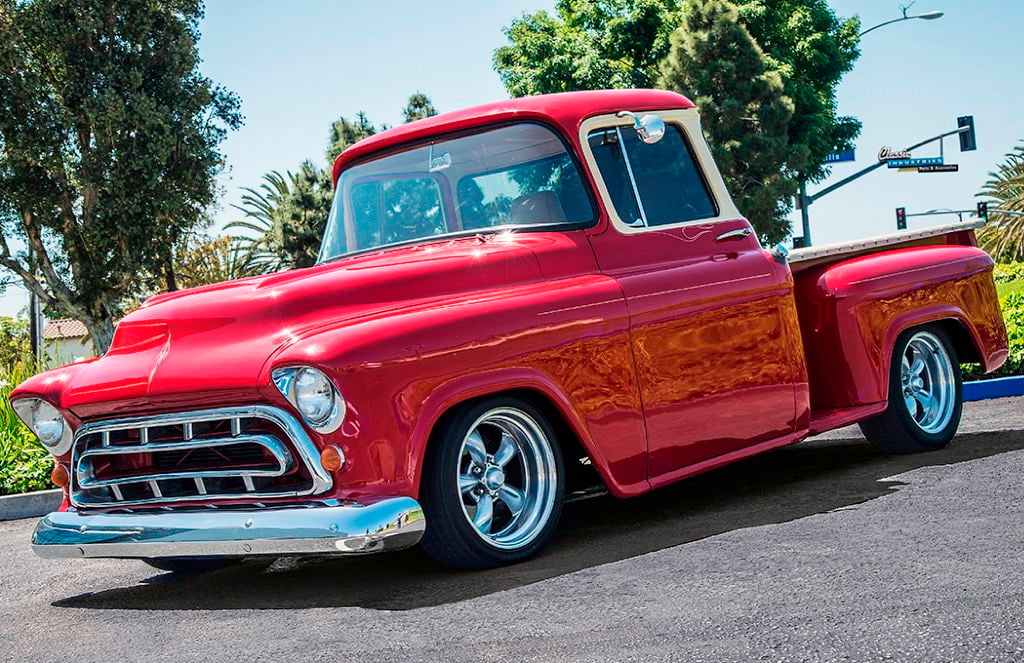 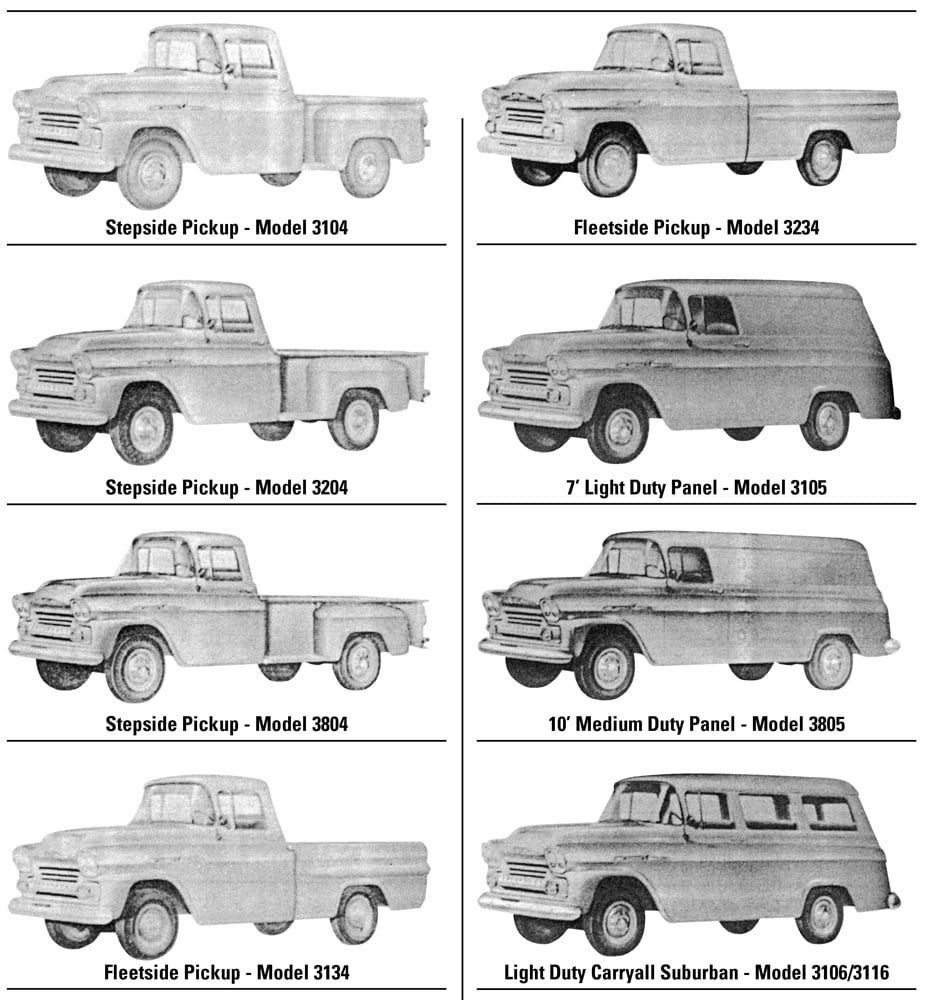 Complete front end redesign. Dual headlights in front fenders. Grill is now a one piece design with parklights mounted in the ends of the grill. Last year for the Cameo pickup. First year for the optional Fleetside bed. Fender emblems have series designation (31, 32, 36, 38 etc.) and Chevrolet in the center the of emblem with Apache on the top rear of emblem. Front hood emblem is 31" long with vertical design in background behind Bow Tie. Serial numbers: 3A 1/2 ton, 3B 1/2 ton longbed, 3E 3/4 ton, 3G 1 ton, etc. 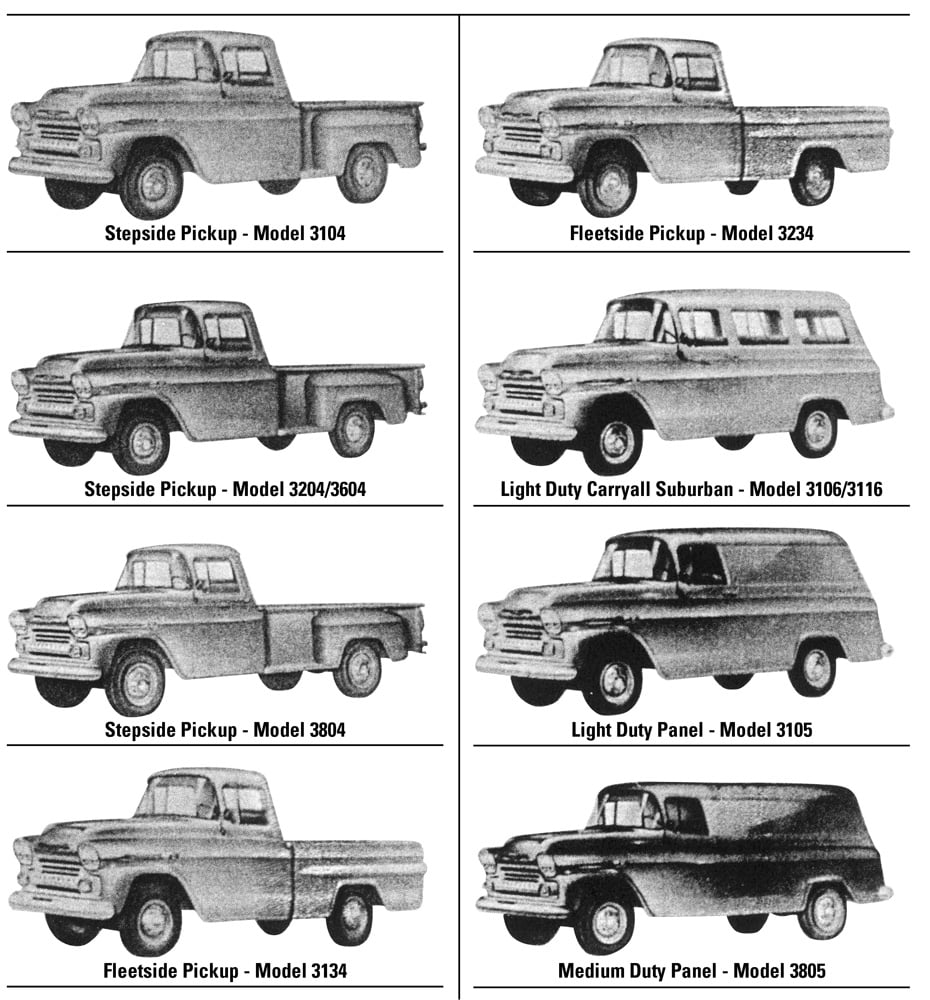 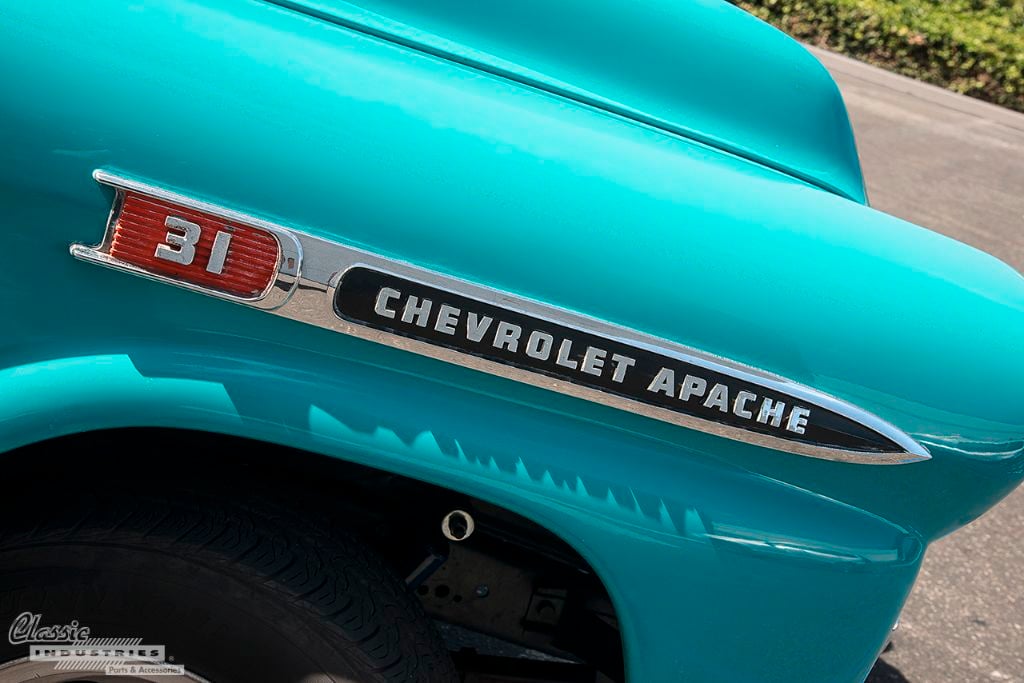 Check back next week for part two of our Chevy truck model year identification guide, which delves into the popular C and K Series models from 1960 through 1972.

You can also check out other entries in our classic car history series:

Need Parts for Your Chevy Truck?

Whether you just identified and purchased a classic Chevy truck based on our guide, or you're already a seasoned GM vehicle expert, we can help you get the replacement parts you need to restore and rebuild your Chevrolet or GMC truck. Browse our selection online or click the button below to get a free full-color GM Truck restoration parts catalog.