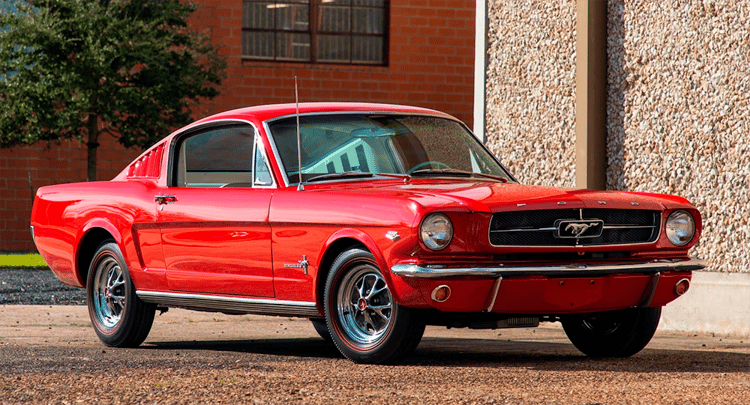 Some automotive enthusiasts are very familiar with the history of the Ford Mustang and why it has sold so well for its entire existence, dating back to its premiere in April of 1964. But most people just view the Mustang as a sporty car with a clever name. There are perhaps a baker’s dozen reasons that the Mustang was such a resounding automotive triumph right out of the starting gate, and why it continues to be the frontrunner in the hearts and souls of millions of car gals and guys.

Looking Back at Ford Mustang History

Lee Iacocca is considered “The Father of the Mustang”. He was a young, ambitious Ford executive who was a business visionary and a natural born salesman. Mr. Iacocca believed that baby boomers represented a sales demographic that could generate almost unlimited money flowing into the Ford Motor Company. That is of course, if only Ford could develop and market a “youth car” that would appeal to these young men and women that were becoming adults, getting married, buying houses, and starting families. The trouble was Ford wasn’t doing too well at that time. The company was still licking its wounds from betting big on the Edsel and being soundly beat by Chevrolet’s specifically and GM’s other brands more stylish and innovative offerings. 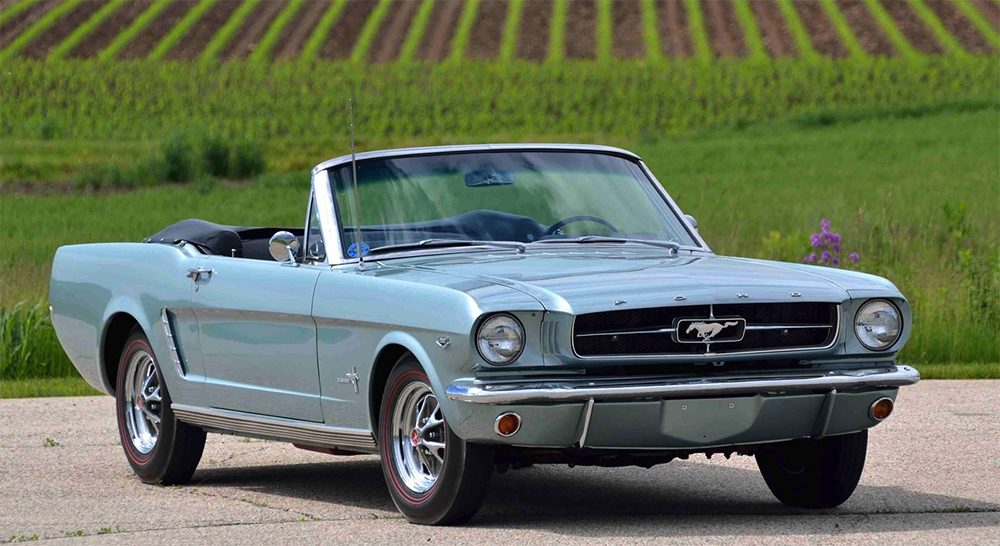 This 1965 Mustang K-code convertible is equipped with a four-speed manual transmission.

In Iacocca’s mind the sales success of the Ford Falcon at that time was proof that the boomer market was one that could seriously explode with the right sort of automobile to wrest away a small amount of those boomers’ well-earned incomes. The Falcon was after all a compact and inexpensive second car that sold well. If this “youth car” had the elements of the Falcon, but also added some more panache in terms of youthful style and performance, Ford could have a big winner on its hands.

The Dilemma was that Iacocca didn’t think Henry Ford II and his cadre of executives, some of whom were risk-averse accountants and guarders of the corporate coffers, would wish to throw money and resources at his seed of an idea “youth car” project. So young Iacocca decided to be sneaky about it. 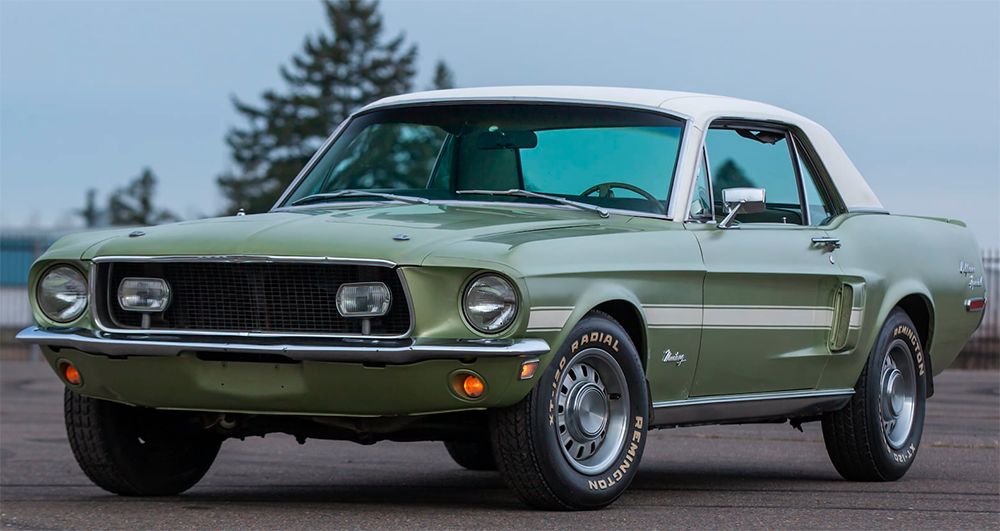 It's always a welcome sight to see an unrestored Mustang that's still in good condition. This 1968 Mustang GT/CS is a great example of such a car.

He selected a Team of colleagues to work on the project in stealth mode. At the time Iacocca was the Ford Division general manager. His assistant general manager and chief engineer was the head engineer for the endeavor, Donald N. Frey. Hal Sperlich, Ford Special Project Assistant, came up with the idea to develop the car on the Ford Falcon chassis. This was a stroke of genius, as the team could save $400 million in development costs by avoiding starting from the ground up. 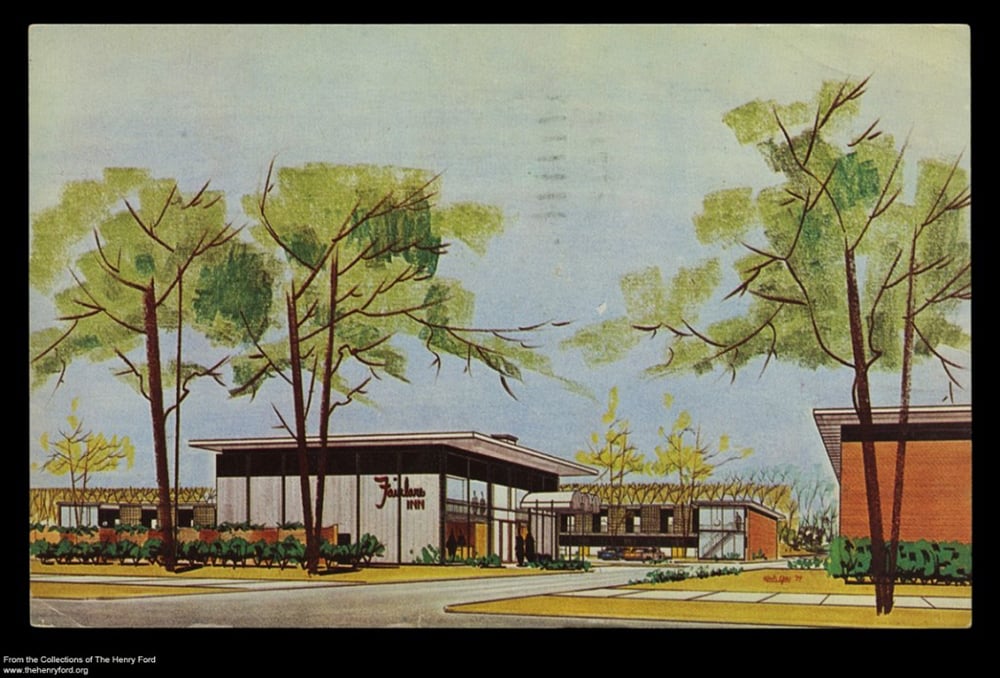 The top secret "youth car" meetings took place at the Fairlane Inn. The above 1960 post card of the inn is from the Collections of The Henry Ford.

The Fairlane Inn is where clandestine meetings took place to formulate what sort of auto this “youth car” should be. The Fairlane was somewhat close to Ford’s corporate headquarters, yet far enough away that the meetings could keep the project hush-hush. Initial recruits to the team were called the Fairlane Committee for this very reason. 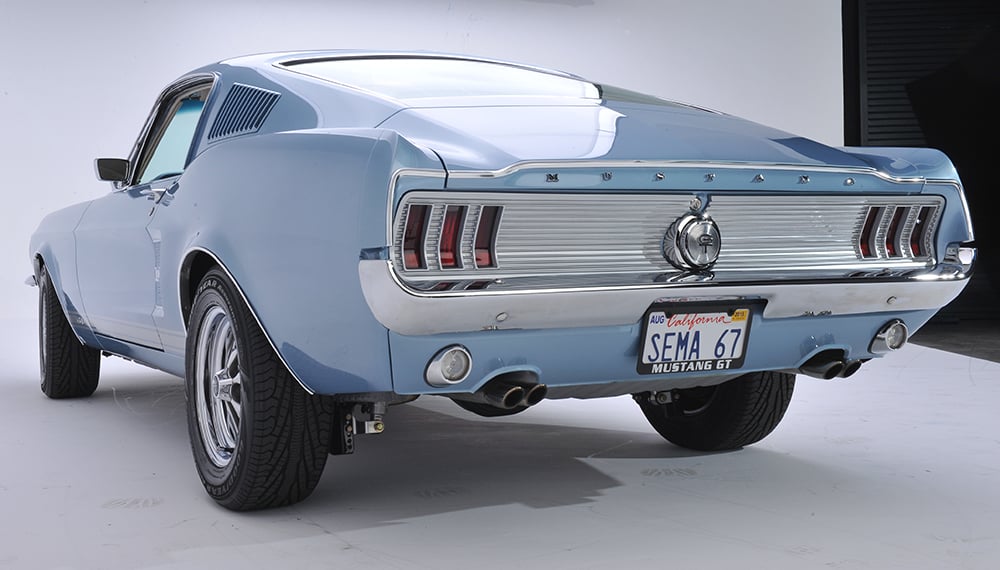 A rare option for the 1967 Mustang was this brushed aluminum tail panel. The panel is supposed to be painted body color, but many enthusiasts will either clear coat the panel to show off the brushed aluminum or they'll paint it jet black or flat black for a performance appearance.

Iacocca tasked Ford vice-president of design, Eugene Bordinat with developing a new “small car”. To foster creativity and speed up the process of product development, Bordinat held an intramural competition with the company’s three design groups: Ford, Lincoln-Mercury, and Advanced Design. The teams had to adhere to these five design edicts: the car would weigh not more than 2,500 pounds (1,100 kg), have bucket seats and a floor mount shifter, seat four people, sell for less than $2,500, have multiple power, luxury, and comfort options, and be no more than 180 inches (5 m) in length.

Parnelli Jones won the Trans-Am Championship in 1970 for Ford in 1970 Boss 302 Mustangs. The impeccably restored car above is of course a street version of this famous corner carver.

Oros gave his team some more guidance with regards to the make-up of the “youth car”. In a 2004 interview, he shared: “I told the team that I wanted the car to appeal to women, but I wanted men to desire it, too. I wanted a Ferrari-like front end, the motif centered on the front – something heavy-looking like a Maserati, but, please, not a trident – and I wanted air intakes on the side to cool the rear brakes. I said it should be as sporty as possible and look like it was related to European design.” 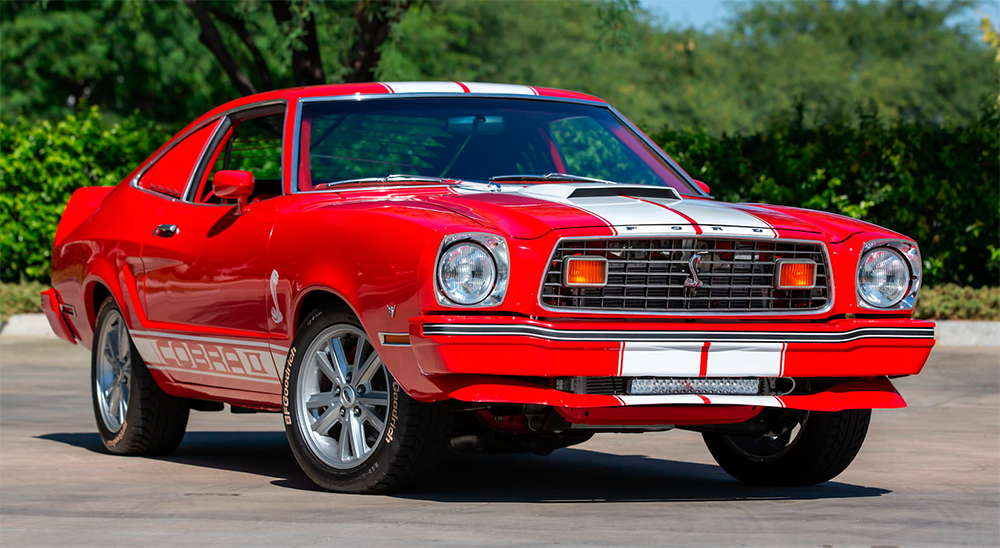 A highly customized 1976 Mustang II sold at the Mecum Las Vegas 2019 Auction for $31,900. There's a 393-cubic inch V8 backed by a Tremec five-speed manual transmission that moves the Mustang II down the road quite sprightly.

David Ash is credited with penning the shape and contours of the Mustang. He agreed that his contribution to Mustang history was substantial, but also stated that, “I had a lot of help, and I don’t think anyone ever does a car by himself, not in these times anyway.”

Gale Halderman created some sketches that softened the edges of Ash’s design that the team transferred to the full-size clay model of the car. Raised quarter lines and faux brake scoops were added to the sides as well, which enhanced the car’s sporty silhouette.

Thanks to several high-performance tweaks to the engine, chassis, and limited production, the 1993 Ford Mustang SVT Cobra R is highly sought after by Mustang enthusiasts.

Iacocca had a tough sale with the Mustang project. He, Sperlich, and Frey had pitched the Mustang project to Henry Ford II no less than four times and were told an emphatic no on each occasion. The colossal failure of the 1958-1960 Edsel still loomed large at the Ford Motor Company. One fall day in 1962, Mr. Ford II dropped in unannounced at the Ford Design studio. According to an interview with Donald Frey in 2010, in his typical gruff fashion, Ford II told Frey: "Frey, I'm tired of hearing about your (expletive) Mustang. I'm gonna approve it, and it's your ass if it doesn't sell." 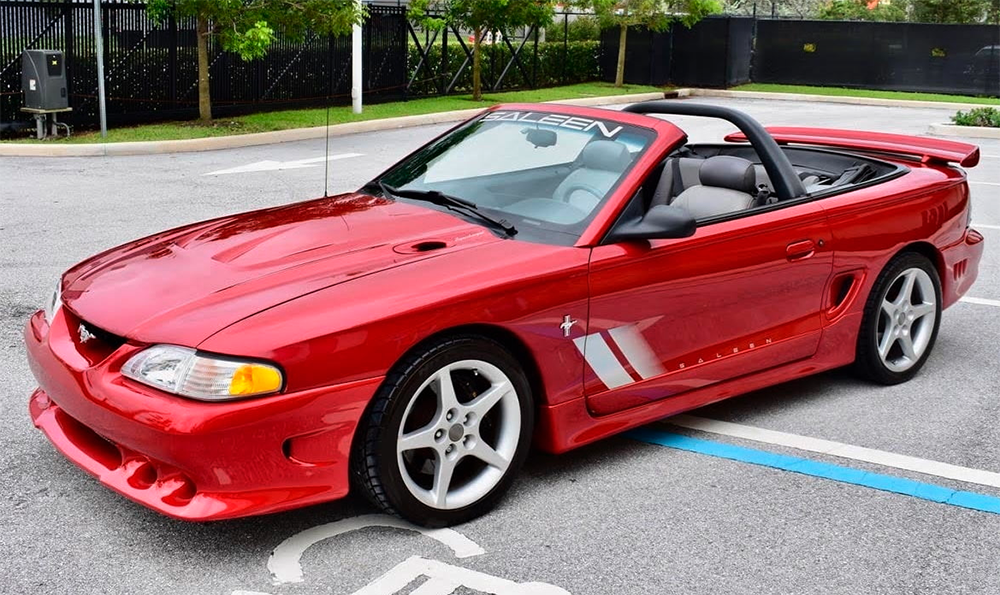 Saleen Mustangs, like this 1995 Ford Mustang Saleen S351 convertible are also highly sought after, and a blast to drive.

Public Relations and Marketing efforts for the launch of the Mustang were also meticulously well planned. Though the Mustang officially premiered at the World’s Fair, held in Flushing Meadow, NY, on April 17, 1964, the media learned about the new car on April 14 at a press conference. The first television commercials for the Mustang aired the night before the World’s Fair unveiling on the big three U.S. television stations: ABC, CBS, and NBC. 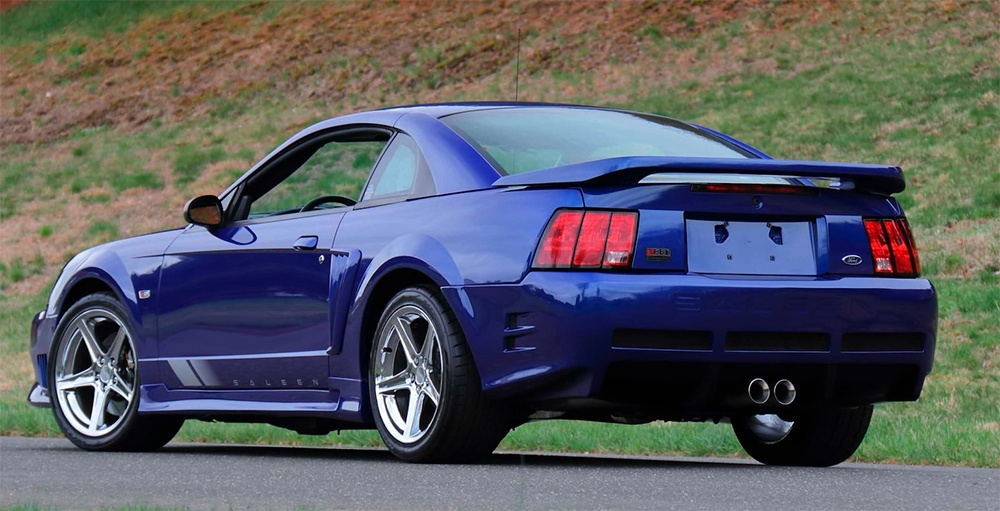 Three prominent magazines at the time were Time, Life, and Newsweek. All three publications had longform articles about the Mustang, and Time and Newsweek had an image of the car on the cover. 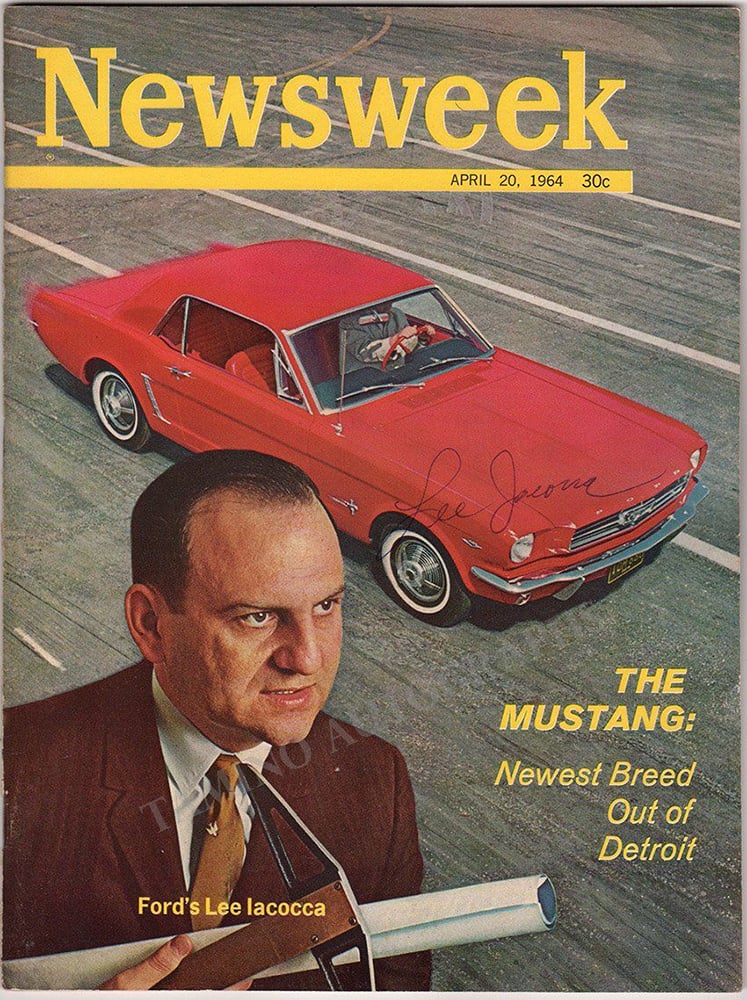 Although the new Mustang was selling astoundingly well right from the beginning, Iacocca had heard complaints from potential customers that the car didn’t offer enough sporting performance and wasn’t large enough. To resolve this misperception, he phoned Carroll Shelby and asked him to prepare and campaign the Mustang as a B Production SCCA sports car (Sports Car Club of America). In a 2004 interview with Shelby celebrating the Mustang’s 40th birthday, Shelby shared that: "Iacocca called me and said, 'Carroll, can you make this a sports car?'" Shelby said his reaction was, "These guys want me to make a mule into a racehorse."

Shelby American Racing received approval from Ford for the Shelby GT350 Mustang project in August of 1964 and took delivery of 100 Wimbledon White Mustang fastbacks, equipped with K-code, 271-horsepower high performance engines and Borg Warner T-10 four-speed transmissions. Shelby’s talented crew made some hot-rod tweaks to the car’s chassis, engine, body, and interior and transformed the Mustang into a street brawler and road racing course terror in short order. At the start of the 1965 SCCA racing season, Shelby had built 100 examples of the Shelby GT350 street model to qualify as a B Production car, then built 36 more cars for racing (two Shelby American Racing team cars plus 34 customer cars). 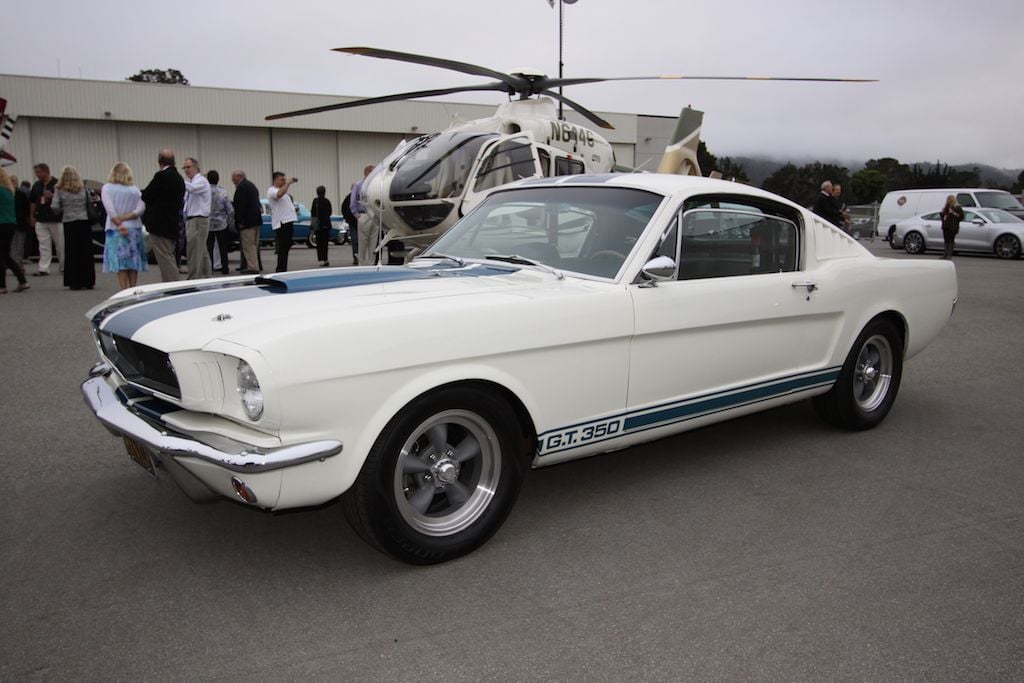 This 1965 Shelby GT350 Mustang was photographed at Gordon McCall's Motorworks Revival at the Monterey Jet Center (photo courtesy of the author).

Tapping Shelby American Racing to improve the car’s sporting reputation proved to be one of the most significant strokes of brilliance in Ford Mustang history. The Shelby GT350 Mustang won the SCCA B-Production Championship in 1965, 1966, and 1967, and the Trans-Am Championship in 1966 and 1967.

Shelby came up with the name GT350 by counting the number of steps from his office to the shop where the car was built. Most experts attribute the name of Mustang to one of the car’s designers, John Najjar. Najjar was entranced with the American Mustang P-51 fighter plane of World War II. When Najjar pitched the potential name to the Fairlane Committee, it was initially shot down. When he subsequently pitched the idea to the team, he mentioned that the associated icon for the car could be a wild Mustang galloping free. Given that the Fairlane Committee related to the theme of roaming free in the west, they agreed that the car should be named Mustang. A new genre of car was born - the pony car! 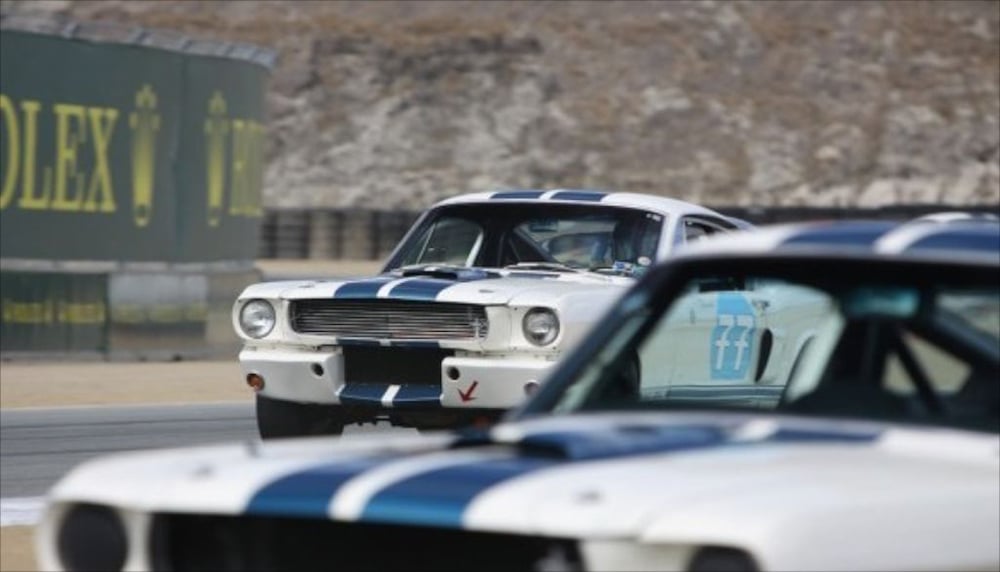 The author focused his camera lens at the 1965 Shelby GT350 Mustang competition model through the photo hole behind a barrier wall at Laguna Seca Raceway in Salinas, California. To his surprise, another off-track GT350 also appeared in the photo, mere inches from the barrier wall that he was standing behind. Yikes! 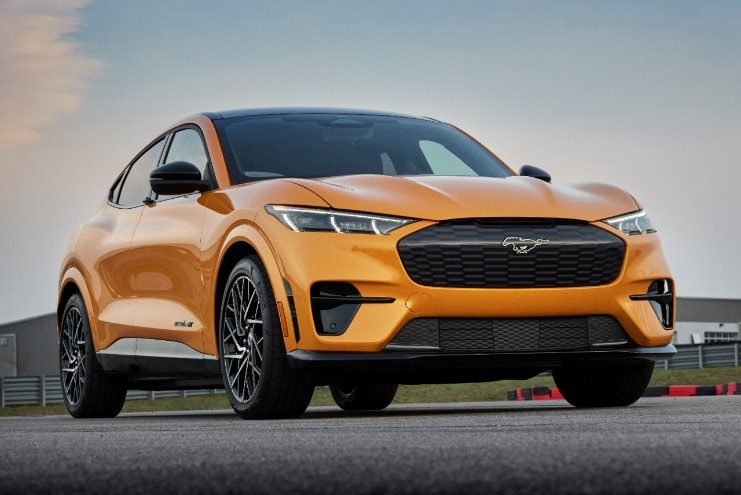 The above 2021 Mustang Mach-E GT photo is provided courtesy of Ford Media.

With six generations and counting, including the electrifying Mustang Mach-E, the Ford Mustang has had a fascinating history ever since it came out of the starting gate in April of 1964. If you have a project Mustang in your paddock, you’ll be pleased to learn that the Classic Industries Mustang catalog has many of the parts you need to keep your pony car running strong. 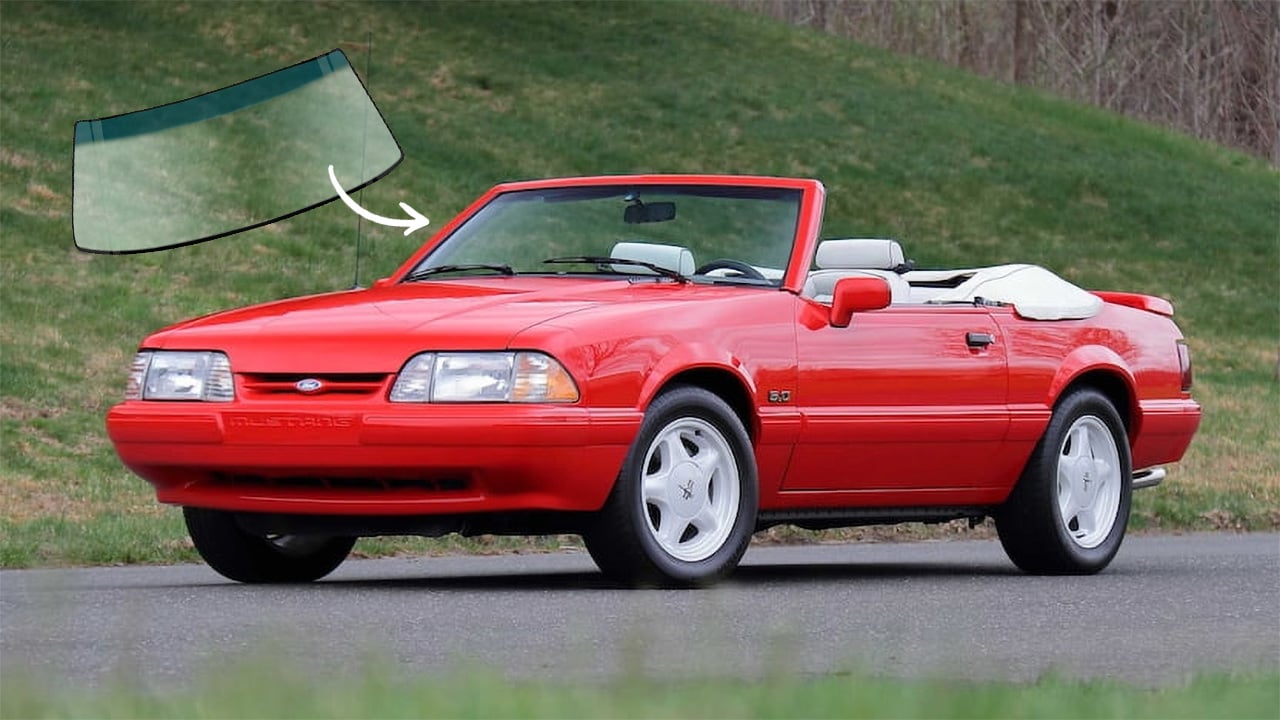 One of the latest additions to our Mustang restoration parts line is a series of replacement windshields for 1964-68, 1979-93 Notchback/Hatchback, 1983-93 Convertible, and 1994-99 Coupe models. Each windshield is manufactured to match original specifications with the correct contours and original-style blue/green shade (for 1979-99 model years). Of course, you can find much more than replacement glass in our Mustang parts collection — click the button below to get a free Mustang catalog and see for yourself!