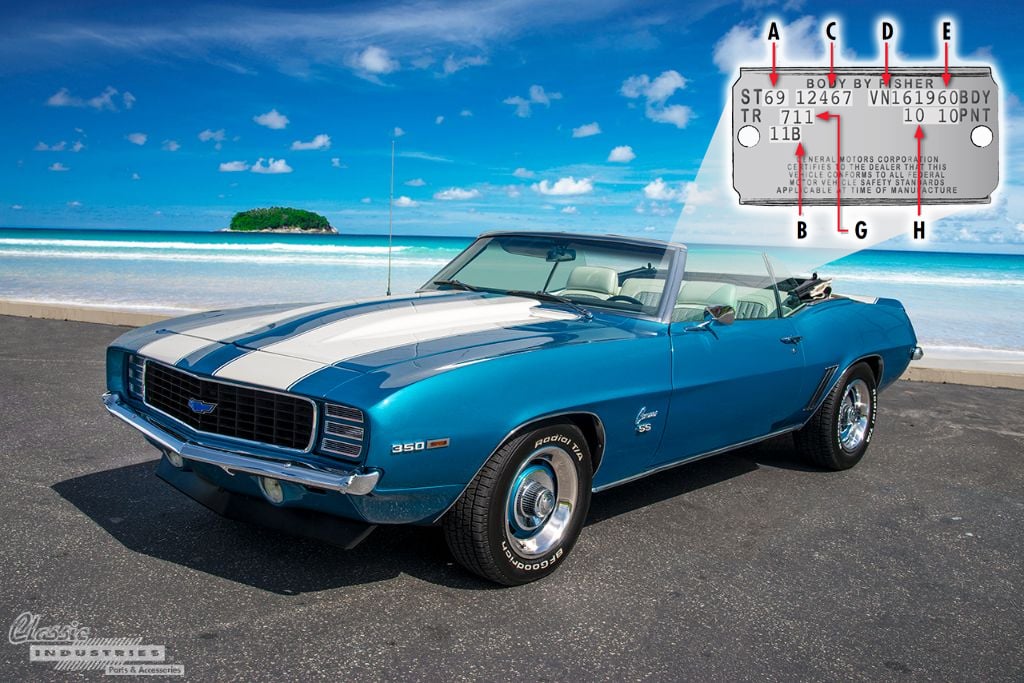 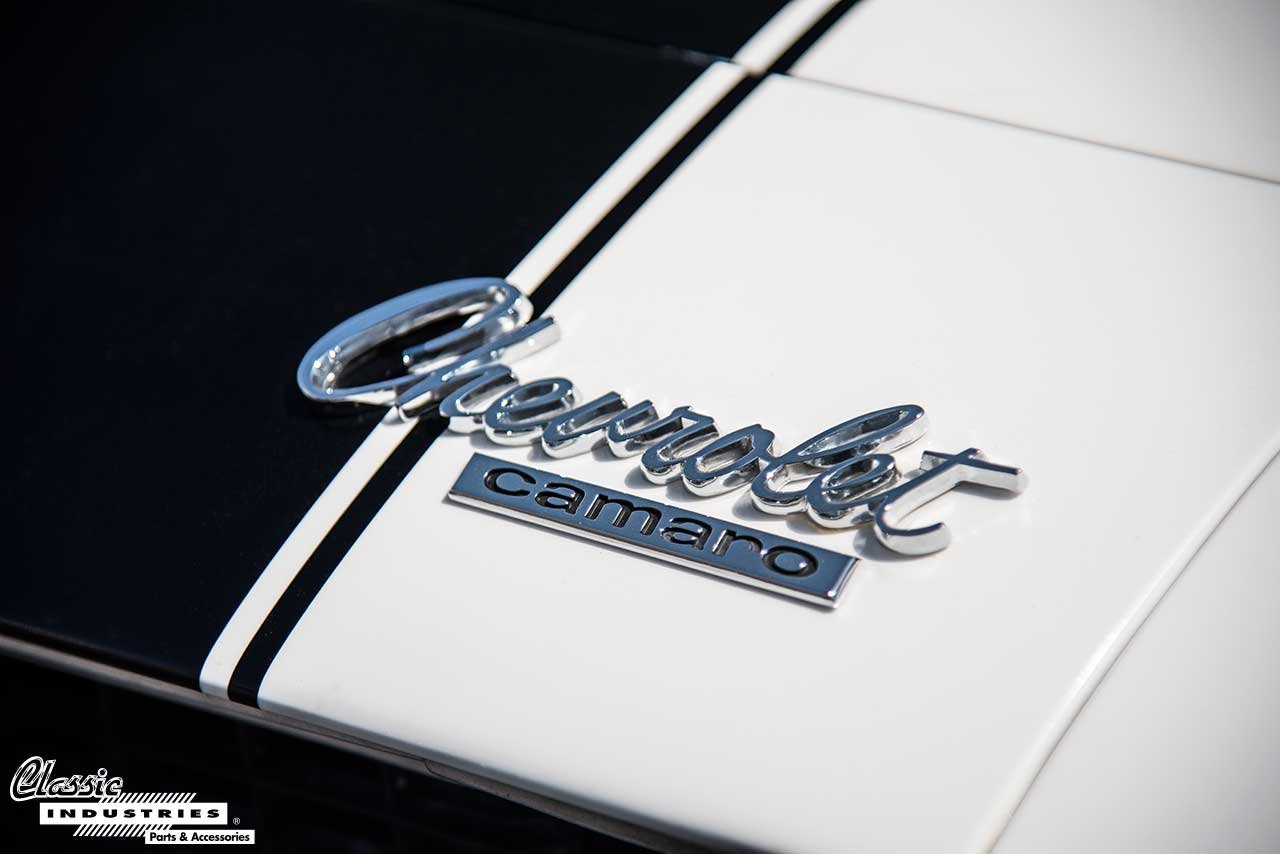 Before we begin discussing the trim tag, we should point out the difference between this and the VIN. The VIN, or vehicle identification number, is a unique combination of 13+ numbers and letters that can be found on a steel plate riveted to the left door hinge pillar (for 1967 models) or the driver's side upper dash panel (for 1968 and up models). The VIN can provide some valuable information about engine type, body style, model year, and more. If you're interested in decoding your Camaro's VIN, refer to our 1967-2002 Camaro VIN Decoder article.

Chevrolet cowl tags or trim tags were attached to various locations on the body of Camaro models from their inception in 1967 until 1985. The plates represented a vehicle’s most basic body characteristics to Fisher Body, the coachworks for Chevrolet Motor Division. Codes listed included Model Year, Model Description (including model and body style), Assembly Plant, Body Sequence Number, Trim, Body Paint Color, Build Date, and Accessory Code. In 1967, option codes were also listed on the cowl tag. 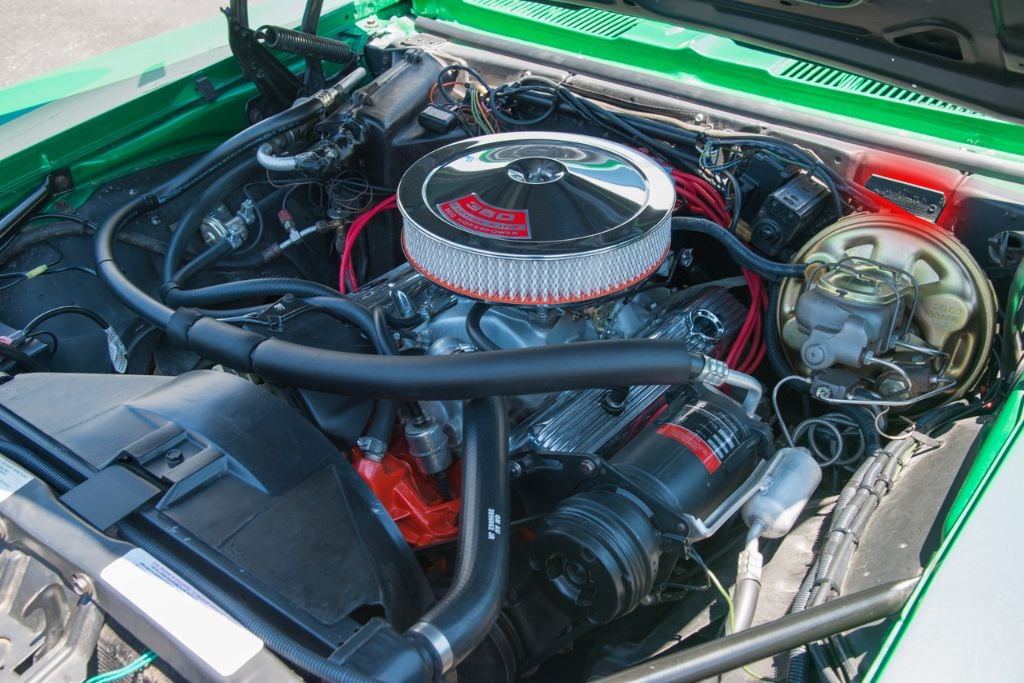 For most Camaro model years, the cowl tag was riveted to the body, except in a few cases including 1973 and 1974, where it was screwed to the body with sheet metal screws. From 1967 to 1969, the tag was located on the firewall next to the brake booster (highlighted in red in the image above). From 1970 to 1981, the tag was attached to the cowl next to the windshield, facing up toward the hood. From 1982 to the end of their use in 1985, the tag was affixed to the radiator support.

A. Model Year Code
Last two digits of the model year. For example, the code for a vehicle body manufactured in 1967 would be “67”.

B. Body Build Date Code
Comprised of three digits, 01 through 12 represent each month of the year and A through E represent alphabetically each week of the month. For example, 11B would represent a body build date of the second week of November.

E. Fisher Body Number
Up to six digits follow the assembly plant code and represent the Fisher sequential body number. Not to be confused with the V.I.N. sequence, this number was approximately sequential, but was for Fisher Body’s tracking purposes only. In 1969, the number was assigned when the order was accepted, not when the body was built. This meant that body numbers were not necessarily sequential. 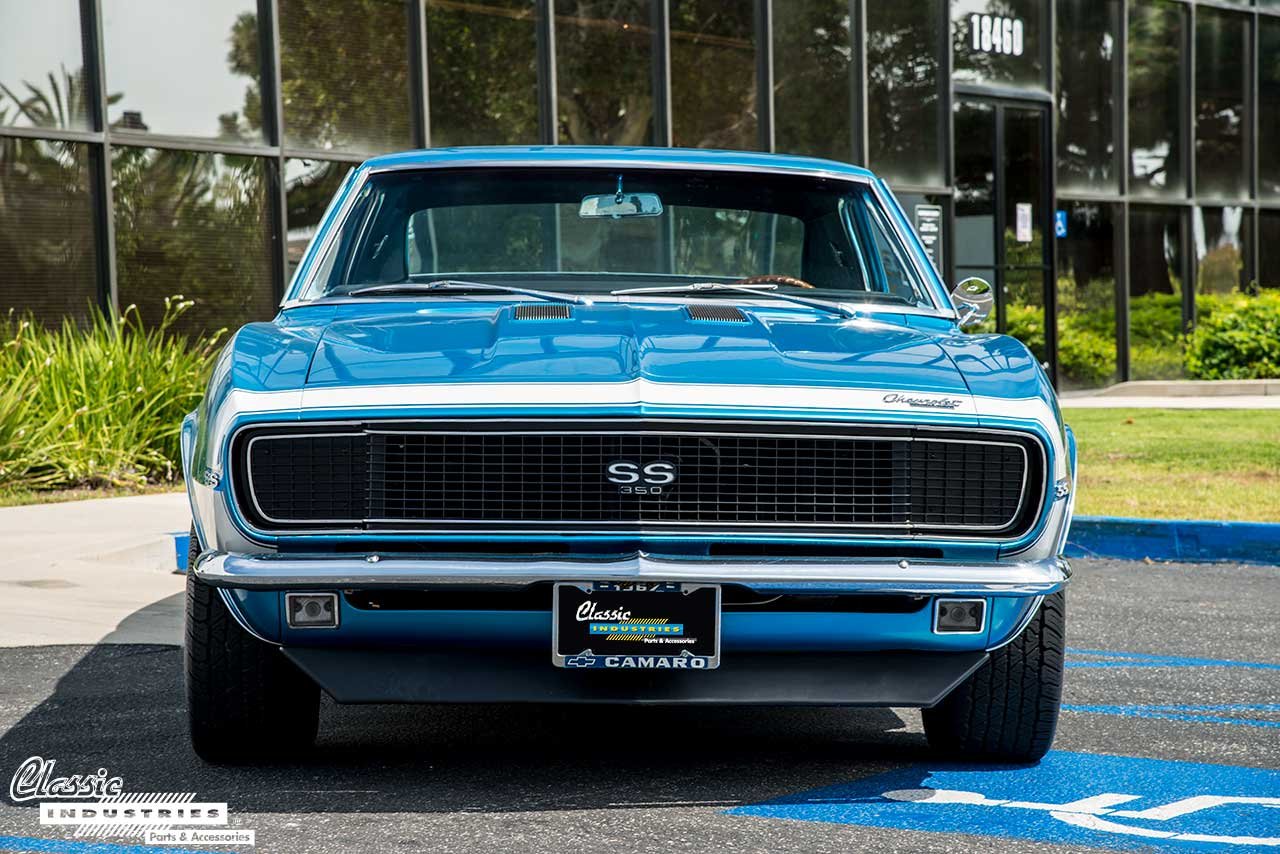 F. Fisher Body LOS Scheduling Code
The Los Angeles (“LOS”) body scheduling code consists of a letter followed by one to three digits. The letter indicates the production day of the month for the beginning of that vehicle’s assembly. The letter “A” indicates the first production day of the month, and was reset the first production day of the next month. The three digits represent the vehicle’s approximate production number each day. At the start of the next day, the code was reset to “1”. This number is exempt from body style, thus a Full Size vehicle could be serially located just before a Camaro or Nova. This code was not used on Norwood built vehicles.

*For 1967 Norwood built cars only, the code was shortened to only one letter and represented the interior paint color code for vehicles built at the Norwood, Ohio plant. Los Angeles (“LOS”) cars would retain the common one letter one to three digit code.

G. Interior Trim Code
The three digits of the TR (trim) code are unique for each year. The combination indicates the color as well as standard or custom interior style. In 1967, a hyphenated letter suffix indicates seat and headrest type. For example, “765-Z” represents the interior trim of standard A50 Strato bucket seats without headrests, trimmed in black custom upholstery. For a list of interior trim codes, refer to this article from 69Pace.com.

I. Body Related Option Codes (1967 ONLY)
This list of option codes was used until 1967 for Chevrolet models and indicated body related options that would be relevant to Fisher Body. The information was eliminated in 1968.

Now that you've used our 1967-1969 Camaro trim tag decoder to learn more about your first-gen Camaro, you may want to restore it to its original specifications, or diverge from those specs to suit your personal taste. Either way, Classic Industries has the sheetmetal panels, trim, interior parts, and upholstery to rebuild your Camaro's body from the ground up. Browse our selection of Camaro parts online now, or hit the button below for a free full-color parts catalog.