Resto-Mod Project Collection Displayed Together for the First Time

The 2013 Grand National Roadster Show in Pomona, CA was host to the first public display of the entire Classic Industries resto-mod collection. The event was the latest celebration of Classic Industries 35th anniversary. The most recent project, a supercharged 1956 Chevrolet Bel Air roadster dubbed OPEN AIR, was the centerpiece of the display, with previous builds from the series standing as reminders of what an enthusiast can do with the right catalog. 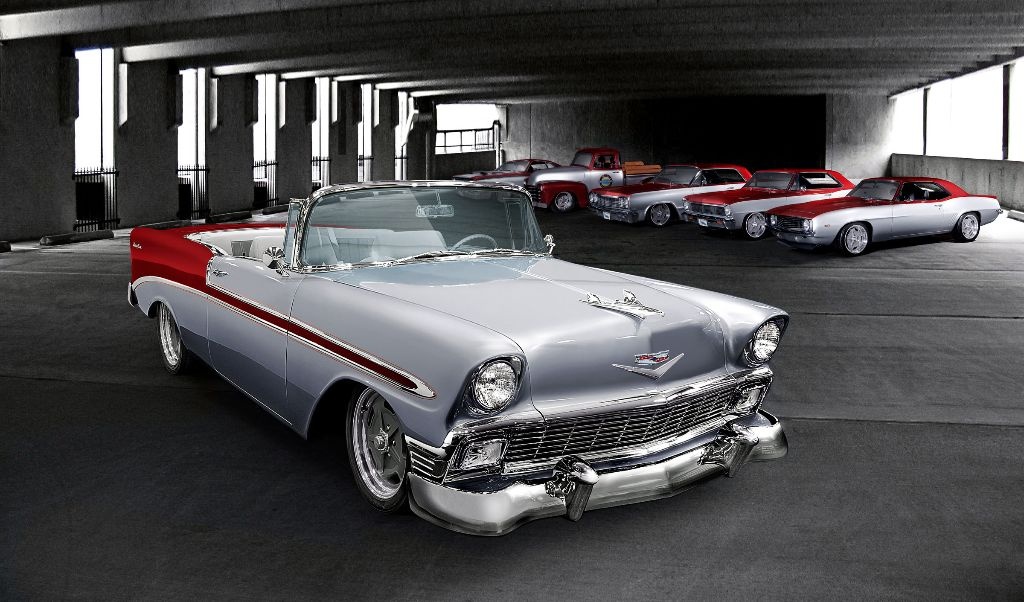 “This collection is our way of showing off the limitless possibilities within our automotive restoration catalogs. Our team has worked very hard to build these unique vehicles and we are proud to display them together.” -Ray Yager, Classic Industries Merchandising Director

OPEN AIR made its public debut at the 2012 SEMA show and is featured on the spring 2013 season of Speed TV’s Emmy-nominated Chop Cut Rebuild. It is the sixth of a multi-vehicle project series that includes the 1969 CAMOTION Camaro, the 1966 INNOVATION Nova, the 1964 SWEET IMOTION Impala, the 1953 Classic Industries SHOP TRUCK, and the 1972 TWISTED Plymouth Duster.

Vehicles in this series share a common paint theme and feature American Racing's "Salt Flat Special" alloy wheels. However, like different players on a football team, each vehicle is built in its own way. For example, the earlier builds in this series, the CAMOTION Camaro, IMOTION Impala, and the INNOVATION Nova might be considered conventional restorations. On the other hand, the 1953 SHOP TRUCK was built entirely from scratch using a new frame and reproduction sheet metal. In the case of OPEN AIR, well... you'll just have to check out the build on Chop Cut Rebuild!

The Classic Industries crew was on hand to discuss the builds and the various features that make each car unique. They were joined by Dan Woods, host of Chop Cut Rebuild, who stopped by to sign a few autographs.