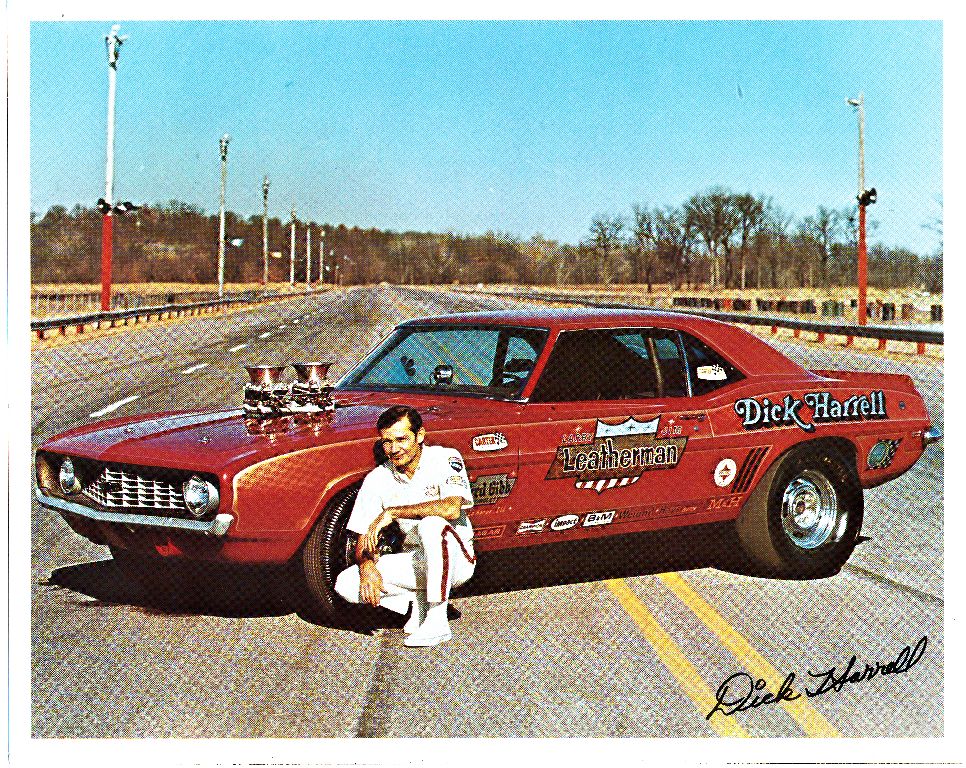 Dick Harrell's funny car in its natural habitat. "Mr. Reflexes" was a popular nickname, but "Mr. Chevrolet" was the name that would last.

Dick Harrell and the Chevrolet Camaro

When the Camaro was introduced as a 1967 model, Harrell teamed up with dealers such as Yenko Chevrolet and used the Central Office Production Order (COPO) process to have the largest V8 engines available installed in the nimble Camaro. These COPO Camaro models became some of the most sought-after vehicles from the original muscle car era. Harrell used his reputation to convince the American Hot Rod Association (AHRA) to create a special Pro-Stock racing class for these models.

By 1969, Chevrolet had taken notice and enlisted Harrell's help for the development of their ZL1 427 aluminum big block V8 for Can Am racing. The ZL1 would find its way under the hood of select Chevrolet cars. The 1969 ZL1 Camaro would prove to be the quickest production Camaro that would leave the factory for decades to come. 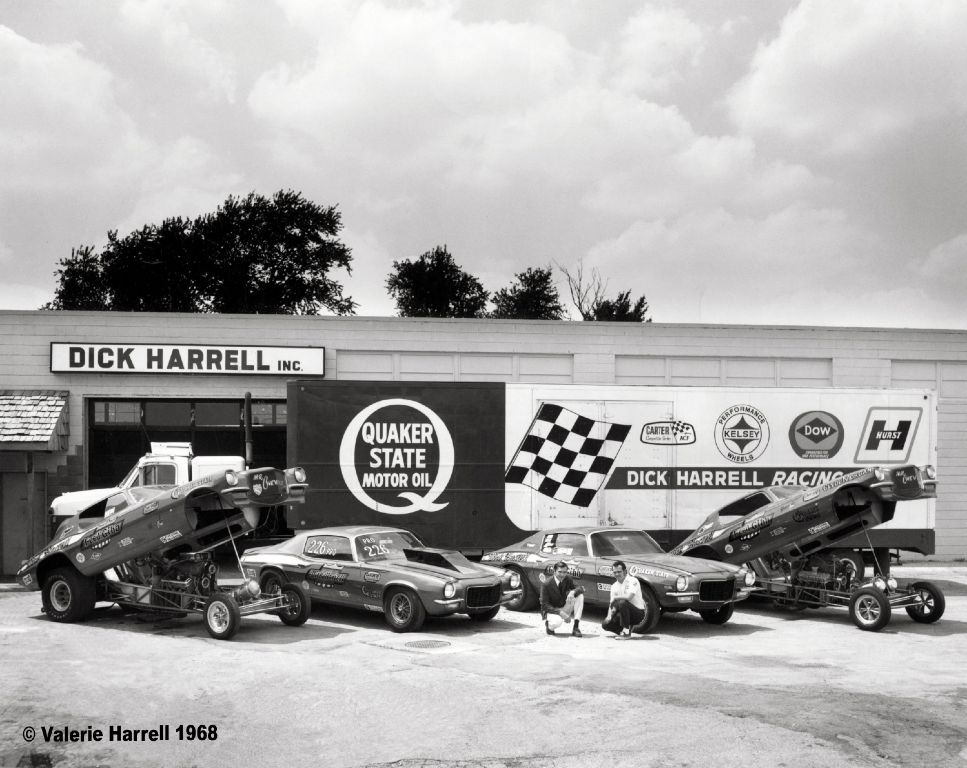 Harrell built upon his reputation in the business world, but his passion for racing would never subside. As he continued his affair with drag racing, he never hesitated to share his love and knowledge of Chevrolet and drag racing to anyone and everyone who was interested.

Harrell was both highly-successful and well-liked. 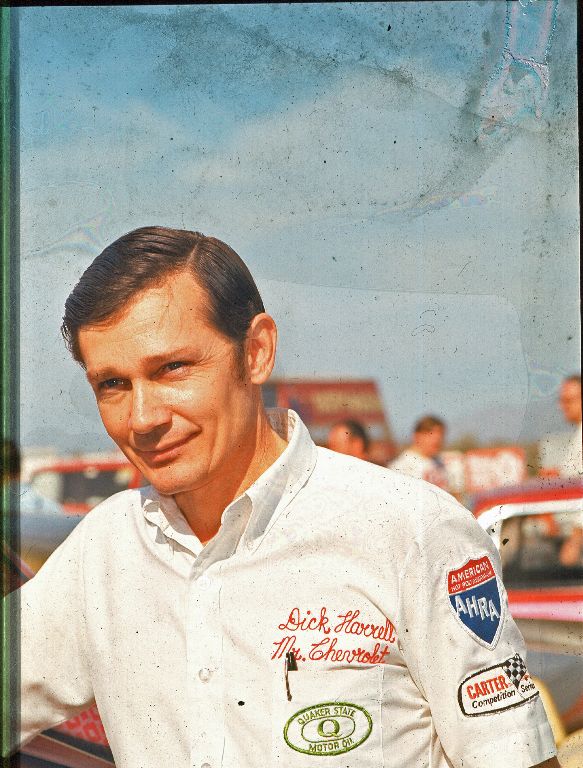 Unfortunately, Harrell's passion for racing cut his life short. In 1971, Harrell lost his life in a drag race in Toronto, Canada when a front tire explosion at high speed sent him into a light pole.

In the aftermath of the tragic crash. It became clear that the tires being used for the front axle of funny cars were not suited for the extreme stresses of drag racing. Special tires were specifically developed to prevent similar accidents in the future.

Even in death, Harrell was able to advance the frontier of drag racing.

A Piece of History

Classic Industries recently added a very special 1969 Camaro that was built by "Mr. Chevrolet" to the collection of display cars.

"When I first came across this rare 1-of-10 427 Camaro at Barrett Jackson, I knew it was a unique opportunity,”

This Camaro started life as an SS 396 car and was immediately sent to the Dick Harrell Performance Center to be upgraded with the best components of the day, including an iron-block 427ci with a ZL1 camshaft, 4.56 gears, and Lakewood traction bars.

This video tribute is dedicated to the man who put together such remarkable vehicles:

Dick Harrell, the loving husband and father, is forever lost except in the private memories of his family and friends. "Mr. Chevrolet," the legend behind everything that made Chevy the force that we know today, will live on in the hearts and minds of enthusiasts forever. 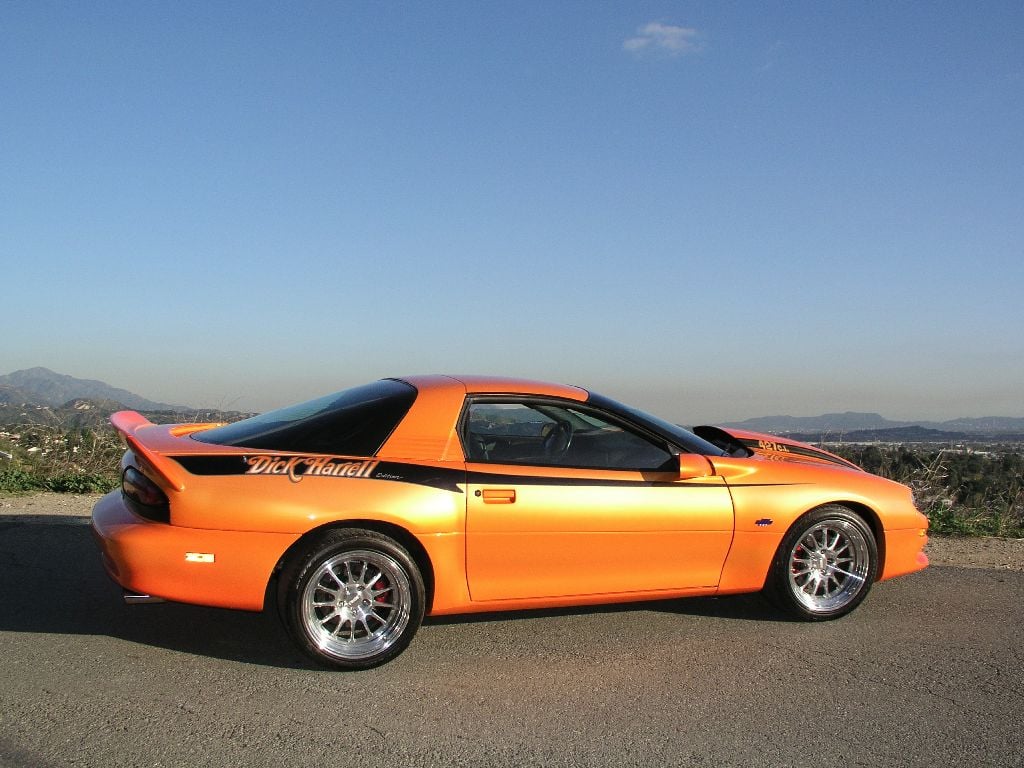 His daughter, Valerie Harrell, keeps the incredible legacy of his career alive by acting as custodian of his records, operating a website and forum dedicated to his achievements, and working with projects that match the spirit of his efforts, including officially licensed gift and apparel items.